Don’t get me wrong, magnet fishing can be a selfless act, helping to clean up our waterways and protect the environment, but another aspect of this magnificent hobby leans entirely the other way — We all dream of reeling in magnificent treasure from the murky depths.

As such, it’s not surprising that many of us wonder if gold is magnetic, as it’s the quintessential treasure.

I mean, when you think of a pirate chest full of booty, you may picture a ruby here and a sapphire there, but it’s mostly oodles of lovely gold, isn’t it?

So, without further ado, let’s explore whether our dreams of stumbling across a veritable dragon’s hoard of gold on our magnet fishing adventures are feasible!

Okay, I’ve got some good news and some bad news. The good news is, yes, gold is technically magnetic. Ready for the bad news? You’re not going to like it… yes gold is magnetic, but it might as well not be.

Don’t worry, I’m not some riddle master that gets their kicks confusing poor readers simply hoping to find some of “the color” during a magnet fishing expedition.

What I mean is that, scientifically speaking, everything is at least a little bit magnetic.

The thing to understand about magnetism is that it’s more of a spectrum than a yes-no sort of phenomenon.

So, while it is indeed magnetic, pure gold will not stick to your magnet when fishing, I’m afraid.

In fact, gold is what we call diamagnetic, as it resists the pull of magnets, meaning that not only would you not be able to hook it with your magnet, it would actually try and escape it.

But don’t kiss your booty goodbye just yet… this isn’t over!

For centuries, people have used magnets to test if what they have is real gold or a cheap counterfeit.

If the gold was unmoved by their magnet, it was likely to be the real deal, whereas if there was some obvious magnetism, it mustn’t have been real gold at all.

But in this day and age, gold is rarely sold in its purest form, by which I mean that most gold traded today, as jewelry, cabling, or otherwise, is actually an alloy.

Now, as I’m sure you’re already aware, an alloy is a hybrid metal comprising two or more metallic elements, and this metallurgic mixing process is carried out to augment the properties of the original materials.

Gold gets the alloy makeover because it’s soft. In fact, calling gold soft is an understatement. As far as solids go, it’s actually kind of gooey.

For instance, a single gram of the color can be squashed with mallets until it forms a sheet of metal spanning an entire square meter… that’s how soft this stuff is.

In light of this, despite its value and popularity, it’s not a practical metal to use in, well… anything, especially not jewelry, so smelters make a gold-ish cocktail with other much stronger metals to make it more commercially viable — See where I’m going with this?

Should the constituent parts of this hybrid material be magnetic, and should they make up a large enough portion of the metallic DNA, the resulting alloy will indeed stick to a magnet.

READ  How Far Do Magnets Reach?

Now, being that alloyed gold is basically ubiquitous in today’s world – which is why we hear all this talk of karats where gold’s involved – if we’re lucky, we may well one day pull some from the water!

At What Point Will Gold Alloy Magnetize?

Generally speaking, you can expect a piece of gold to stick to a magnet when a metallic metal makes up as little as 20% of the metallic makeup, but it really does depend on the metal used during the smelting process.

Needless to say, combining gold with other non-magnetic metals will do nothing for its cumulative magnetism.

What Karat Gold Could Be Magnetic?

Most gold jewelry falls into these categories, so I’m willing to bet there are at least a few gleaming artifacts lurking on the beds of our local bodies of water!

Can Gold Be Made Magnetic?

There have also been some recent studies that show the heating of gold can make it minutely more magnetic but not enough to stick to a magnet, especially if the gold in question is half buried in crud at the bottom of a river.

So, practically… no, gold cannot be made magnetic — Boo!

Which Metals Increase The Magnetism Of Gold?

These include cobalt, iron, neodymium, samarium, and gadolinium, steel, stainless steel (sometimes), but only a couple of these are commonly spliced with gold to make a more robust alloy.

The two special metals that get the pleasure of mingling with gold are iron and nickel, two highly magnetic materials, so if you pull up a gold chain or two, and perhaps the odd bracelet or earring, you already know why you were able to fish them from the water.

It’s unlikely we’ll ever drag up a treasure trove worth of gold on our magnet fishing excursions, although, if we’re lucky, the odd find here and there is definitely a possibility, but it will never be anything close to a pure specimen.

Still, we can dream, and besides, there are other valuable metals and items lingering just beneath the surface of our favorite magnet fishing spots.

Just because gold isn’t a common find, doesn’t mean we won’t head home with a bucket full of awesome stuff, and let’s not forget about the environmental impact of our efforts.

So, keep at it. Gold or no gold, magnet fishing is a fantastic pass time, one that never ceases to amaze, and who knows, maybe you’ll find something even better than the color! 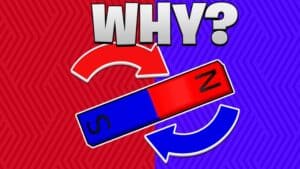 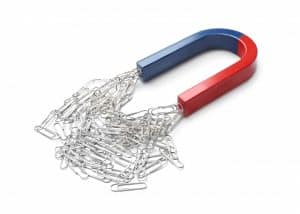