Is it possible to go magnet fishing with microwave magnets? The short answer is, technically, yes. However, that probably isn't the right question to be asking. The right question is “should I take apart a microwave to get the magnets inside?”. The answer to that is probably not.

Using microwave magnets is basically useless for magnet fishing. They are weak and probably couldn't lift a lure out of the mud. There are many dangers involved with salvaging magnets from a microwave. High risk with little to no reward makes this a terrible idea.

Some users have retrieved the magnets out of old speakers and claim they worked great. This sort of creativity has sparked even more creativity within the magnet fishing community. From microwave magnets to electromagnetic magnets and anything in between.

These sorts of ideas sound interesting from the surface, but let's look into why it's dangerous to attempt the removal of microwave magnets, and why it isn't worth it for magnet fishing.

The Dangers of Retrieving the Magnets

First, let's take a look at the dangers you will be facing when attempting to take apart the microwave. There are three main components to worry about. This is the magnetron, transformers, and capacitors. Let's take a look at each one and see why they are so dangerous.

Magnetron can potentially be fatal. This is the case if it contains beryllium oxide. This chemical is very lethal if inhaled/ingested.

Usually, you are safe from any kind of harm. However, if you don't know exactly what you are doing you may break the ceramic insulators.

The ceramic insulators are what you should be worried about with the magnetron. If left alone, you should be safe from any beryllium oxide. However, it is still a danger that just isn't worth two tiny microwave magnets.

Transformers are dangerous in two ways. For one, they are extremely heavy and sharp. If you dropped one of these on your foot it wouldn't be pleasant.

READ  Magnet Fishing with an Electromagnet

The other danger is the risk of being shocked. Most likely there won't be any power source for this to happen, but it is still possible.

The capacitors are another very dangerous and potentially lethal component. if you don't know what you're doing and don't know what one of these looks like please don't attempt retrieving magnets from a microwave.

These capacitors are a pretty decent size and are typically charged to thousands of volts. That is definitely a lethal amount.

If the capacitor doesn't have built-in discharge resistors then it could store this charge for days. Also, even if it does have this safety mechanism, there is still the possibility that it fails.

If the capacitor is charged and you happen to touch the terminals, or something else touching the terminals, while fishing for the magnets, you will be in for a very painful shock.

The capacitor in a microwave can be discharged. Though, you would need to lookup an in-depth tutorial. Also, you would want to make sure to use a certified insulated tool. In any case, I would not recommend doing it, and it's definitely not worth the risk either.

As you can see, there are many dangers with taking apart a microwave. However, rest assured you have nothing to worry about if you use the device correctly.

As long as the cover is on, and nothing is being smashed or pulled apart, you have nothing to worry about.

The Magnet Isn't That Great

Hopefully after looking at the dangers of retrieving microwave magnets I've convinced you that it's just not worth it. If you're still tempted to try it, maybe you will think differently after taking a look at the magnets themselves. If your goal is to use them for magnet fishing, you may be disappointed.

Most magnet fishers use neodymium magnets, as they are the strongest type of permanent magnet available commercially. The magnets you will get from a microwave or about 10 times less effective.

The magnets you will find in a microwave are of the alnico type. This is a very weak magnet. Think of the fridge magnets people have put (or still do?) on their fridge. They are like that but bigger.

When I say the magnet is weak, I mean it is weak. You will be lucky to pick up something that's 2 lb. The best you can hope for is a bunch of hooks and lures, and that's only if they aren't stuck in the mud.

Hard to Make it Effective

Another thing to note is the shape of the magnet. Magnets from a microwave are a circle shape which makes it kind of hard to knot a rope to it and still be effective at magnet fishing.

If you tie it through the hole of the magnet, when you go to pull the rope out of the water the magnetic side will be facing side to side. Therefore, objects on the ground won't be picked up.

As you can see the magnet from a microwave is very weak and ineffective for magnet fishing. Tying a rope to it in a way that allows the magnet to pick things up off the ground will be a challenge. And even if you do get that part to work, it will only pick up very light materials that aren't buried in the mud.

If you're looking to retrieve a magnet from old junk around the house, there are better and safer ways to go about it. For instance, there are pretty decent magnets inside of hard drives and old speakers. These magnets will be much more effective and retrieving them is much safer.

Retrieving the magnets from a hard drive is relatively safe. Your major concerns will be protecting your hands from broken glass. Some hard drives have glass platters that could break. Also, try to avoid pinching yourself between the two magnets. Not life-threatening but it kind of hurts.

The good news is magnets from hard drives are much stronger then microwave magnets. However, there are two downsides to these magnets. The first is that they aren't very waterproof and the second is they are only single-sided.

The coating on the magnets is the same nickel coating on most fishing magnets. The difference is the coating is thinner. It won't last forever which is why you will want to waterproof them if you can.

You can easily correct the single-sided issue, by removing the backers. However, this will make them even more in need of being waterproofed and will make them a bit harder to tie a rope to.

READ  Magnet Fishing vs Metal Detecting: What is More Rewarding?

The magnets from old speakers are similar to hard drives. Easy to get, not dangerous to disassemble, and more effective than a microwave magnet.

Just remember to be safe while taking apart the speaker. Wear gloves to protect your hands from sharp objects, and safety glasses in case something comes flying off.

Just get a Cheap Magnet

This one's obvious, but I might as well say it. Magnet fishing is a pretty cheap hobby to get into. All you need is a rope, magnet, and maybe a bucket to put your findings in.

There's so much competition for all these products. This is great for the consumer as there are many amazing choices that are high quality yet still affordable.

Here's a sweet magnet from Amazon with great reviews. Anyone could afford this magnet and it's a great starter for someone just getting into magnet fishing. You can also refer the top 10 magnet fishing kits that I reviewed, which speaks about the pit falls you should avoid before buying a kit.

Make sure to get a carabiner too. That way when it's time to upgrade it's super easy to switch magnets without re-tying the knot.

I found a sweet bundle deal on Amazon you might like if you don't already have a setup. Refer to the following image.

As you can see, magnet fishing with microwave magnets is possible but not practical. The magnets will be weak and pretty much useless for picking up anything besides hooks and lures. If the item is in the mud the magnets won't pick it up either.

Not only this, but the dangers of retrieving the magnets are enormous. The transformers, capacitors, and magnetron are all potential threats.

Related article: Can you Magnet Fish Anywhere? What Does the Law Say?

Here's an insane video with over half a million views. The man is cutting into the magnetron with an ANGLE GRINDER?!?! … Please, do NOT do this. It just isn't worth it. 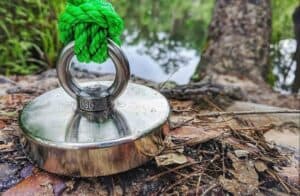 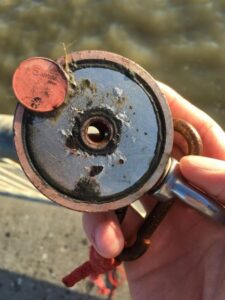 What is the Right Size Magnet for Magnet Fishing? 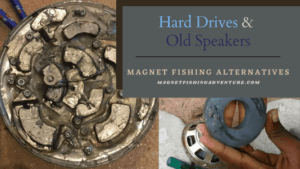 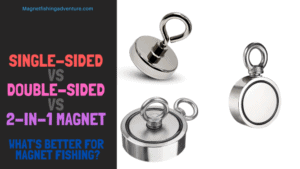 Single-Sided vs Double-Sided vs 2-in-1 Magnet: What’s Better for Magnet Fishing?