Of all the popular YouTube magnet fishing hosts—and there are many—none speak with as midwestern an accent as The Fisher.

With a channel of over 631,000 subscribers, The Fisher, welcomes his viewers in his Americana singsong: “What’s going on to-day, guys?”

“OH. MY. GOODNESS, YOU GUYS. First throw of the day… we are gonna walk this one to the shoreline, baybay.”

The Fisher fumble-rooski’s the heavy object, but he doesn’t pull his magnet up empty-handed. He dredges up a hitchhiking dinner plate.

“What the heck? I didn’t even think plates were, uh, magnetic,” The Fisher ponders. “That must be, like, ceramic or something… first find of the day.”

The heavy object that proved such a challenge? You guessed it. A bicycle. The interesting ceramic plate carefully documented, our host ventures down toward the bank to examine the bike.

“Any boogie monsters living under da bridge?” he asks. “I don’t think so.”

And even there were, The Fisher would probably greet him with an enthusiastic fist bump.

What do all these professional treasure hunters have in common? Overflowing enthusiasm.

Jumping up and down, shouting, narrating excitedly, treating every piece of refuse like it’s a priceless artifact—it’s hard not to get excited by The Fisher’s energy, even when he pulls something that otherwise seems like trash out of a stinky river.

What it seems like we are witnessing in these magnet fishermen are modern magicians exercising the power of a positive mindset to coax hidden wealth from the very bosom of the earth.

If you treat everything you find as exciting, you’re bound to find exciting things.

“You guys, the water around here is just unbelievable. I find a bike almost every single time I go magnet fishing… First throw of the day, we got us a bike-a-rooski.”

Our  rotor, a rubber-capped leg off of a discarded stool or chair, some small tool like a wrench or ratchet.

“Duuude, that is really cool, man. I wonder if you can clean, uh, something like this up, and I wonder if it’s still useable, ya.”

“Well look at that thing, guys. That is a funky-lookin’ piece, we got a lil hook-a-rooski, there.”

Following “A little under the bridge toss-a-rooski” The Fisher dredges up an old piece of steel— with a stowaway fish inside.

Perhaps a goby? “What in the world, man?”

If this truly is a goby, The Fisher ponders, considering the fate of the tiny fish, then it is an invasive species and is not legally allowed to be placed back in the water— but he decides that he isn’t going to be the one to kill the tiny fish, and sets it free.

Then he finds a clamp and a screw—and a mysterious marble or ball bearing containing curious red gems.

He pulls up some more scrap metal, including a tangle of wires, and a little nailski—before the deadly find of the day is revealed.

It appears to be some kind of gun. A rifle or a shotgun of the sawn-off variety, similar to the one wield by Mad Max in Fury Road. There is some sort of bolt action on the top, but the mud and age made it hard to determine much about the weapon.

The Fisher calls the police, who send out an officer to collect the gun.

“I didn’t want to take it if there was anything going on with it,” The Fisher tell the cop.

“This thing is old,” the cop replies. “Crazy. What else did you find?”

He saunters over and examines the pickup truck bed full of discarded bikes. “These are all stolen bikes, I’m sure,” he says. “What do you do with this stuff?”

“Just take it to the scrap yard,” The Fisher assures him.

It is definitely not easy being a traveling adventurer-slash-magnet fishermen, always living within the thin boundaries of the law, so make sure to contact local authorities if you’re ever unsure about the legality of something that you find, or if you don’t know whether its legal to fish in a certain area.

In a recent video, The Fisher tossed his magnet off of a railroad bridge, dredging up several railroad spikes, among other exciting finds. 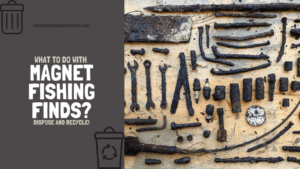 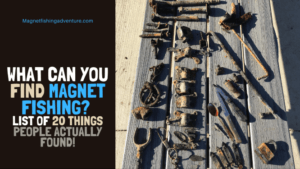 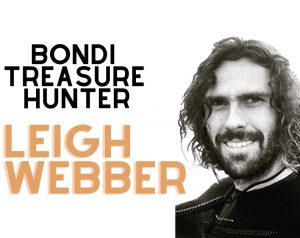